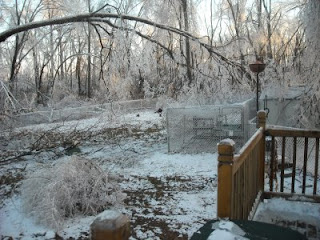 A Beautiful Day...Anyone living in the NWArkansas area knows that everybody, in these here hills, has been on a quest all winter long for a beautiful day! Finally, yesterday on April 8Th, we had a normal, sunny, beautiful, spring day. But, today on April 9Th we are watching and bracing for more BAD weather which includes isolated storms, tornado watches, and high winds. What is it with this crazy weather, especially the last few of years?

The Ice Storm of 2009 was hard for all of us to handle. Many people would go without power for weeks...ten days for me and #3 at the Turquoise House. The City of Fayetteville has yet to clean up all the storm's debris a couple of months later and is negotiating on having tons of tree mulch disposed of in an environmentally safe way. Good luck with that! The City of Springdale is just going to burn their debris to get rid of it. No tree huggers here. And, I read in the Fayetteville Morning News that the City of Bentonville was presented a $1.5 million bill for their debris removal much to the horror of city officials. Just a slight misunderstanding between these elected officials and the company they contracted with to remove the tree limbs. Nice to know elected dignitaries (unfortunately at the taxpayer's expense) get screwed over too, just like the rest of us happy homeowners...but, shouldn't elected officials or board members or the like be held to a higher standard of knowledge to avoid little mishaps such as these or something like that?
And it was just a year ago, to this exact date, that the Fort Smith/Van Buren area got hit with that really bad hail storm. And then another hard hail hit just a short time later for those poor folks. Although, Fayetteville was spared the baseball size hail, we did not escape the wind damage especially at the Turquoise House, where high winds and Hurricane Ike brought down plenty of 100 plus year old trees throughout all of 2008. Fortunately, no damage to house, cars, animals, or me and #3...must be living right. 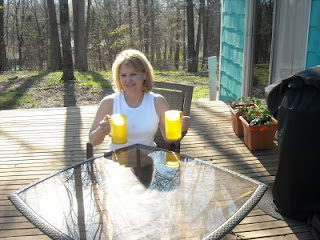 Then yesterday, as the temperature rose to the 70s, and I noticed the coalescence of the bright, yellow sun with the newly, budding green foliage, I quickly called #3 and requested that he bring home margarita makings of which we promptly enjoyed on our big deck overlooking the hills of the Ozarks. Glad we got that out of our system...because tonight we could be carried away Todo and Dorothy style! So you see why it is, that all of us up in these here hills just wanted one nice day. And that appears to be all we are gonna get. Cheers!